The IT Support Learning Hub

The most educational business technology blog for Southern California executives, featuring insider tips, articles, and videos on how to get the best IT results.

Ammon is a virtual Chief Information Officer (vCIO) for Accent Computer Solutions, Inc. He helps clients plan their technology so their business goals become a reality. He guides technology strategy and vision as a trusted technical advisor to his clients.

Ask An IT Guy

How Do I Secure My Network for Remote Users? - Ask an IT Guy

In early 2017, big players like Amazon and Apple both announced they would be adding remote roles to their work force. Billionaire Richard Branson noted, “flexible work is not just for low-level employees but should also be offered for positions higher up in the pipeline so that rising stars have flexible jobs to progress to" (cnbc.com).  The truth is, some form of remote work already exists in most industries. Think about techs in the field or on-call dispatch efforts. Anyone who works outside of your office could fall under the "remote" umbrella.

Ask An IT Guy

When Should I Upgrade Old or Aging Hardware? - Ask an IT Guy

Upgrading aging hardware is a KEY function in keeping your IT infrastructure running as smoothly as possible. Aging hardware can be a daunting task to replace, especially when you're trying to find out exactly when it's time to do so. 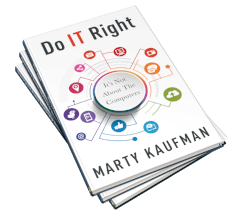 Do IT Right: It's Not About The Computers

Optimize your business's IT function, understand proper - and cost effective - IT staffing, and learn from the mistakes others have made.