Paying It Forward by Passing on Knowledge – A Spotlight on Mark

When Mark came to work at Accent in 2021, it was because he wanted to go back to his roots, working on computers. He began his career back in the 1980s, and he says that he and the computer industry grew up together. In the early days, it was all about the challenge and learning something new. These days he’s more interested in sharing his knowledge.

“One thing I learned managing in my last job when I had almost 40 people reporting to me was that the more you taught them, the better they did their job,” said Mark.

As a Sr. Systems Engineer for Accent, Mark works on the biggest IT environments and handles the toughest tickets. Although his role doesn’t include managing a team, he’s called on from time to time by team managers to participate in troubleshooting or provide his input on a particularly difficult situation. He’s always willing to contribute, and he considers it a compliment that he’s asked.

“Mark is very knowledgeable and is not only a great asset to the orange team, but he also assists the blue and green teams when it comes to anything related to tier three,” said Mark’s supervisor, Abel. “He pays it forward when it comes to passing that knowledge on and provides guidance step by step.”

There’s a lot about IT that you can pick up just from being on the job and being exposed to a variety of situations. There’s a lot that has to be taught, however, and Mark believes that this has been something that’s been neglected in the IT industry as a whole.

“I’ve always maintained a strong culture of teaching and documentation because we have really intelligent people, but mindreading is not one of the gifts we’re given,” he explained. “You have to learn the fundamental building blocks from the past, and that requires that you be taught. It’s not something you can just pick up. You have to actually be taught the right way, and from that, you can learn better ways.”

Mark’s desire to share what he knows through detailed documentation and person-to-person collaboration is a great fit with the Accent culture. Working remotely from Texas, it could have been difficult to get that collaboration going, but Mark appreciates the value of relationship. When he was first hired, he went to the Accent headquarters in Rancho Cucamonga for a week and got to know some of the people that he works with.

He was also introduced to the cooperative type of relationships that the company has with clients. Some have internal IT staff, and some don’t, and every organization is on its own path to IT maturity. It’s quite different from working with enterprise-level companies. 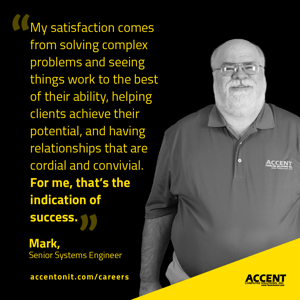 Whether they’re large or small, success looks the same for Mark. It’s knowing that the client is so comfortable with what is being provided that the IT team is considered a friendly partner and not a contractor.

“My satisfaction comes from solving complex problems and seeing things work to the best of their ability, helping clients achieve their potential, and having relationships that are cordial and convivial,” he said. “For me, that’s the indication of success.”