Video conferencing and virtual collaboration are a major part of the business world today. Many companies are asking some (if not all) of their employees to work from home, causing the demand for teleconferencing to skyrocket.

With so many video conferencing tools to choose from -- how do you know which one is right for your business?

This will help give you a clear picture of which video conferencing option is best for your specific needs.

Zoom is a household name these days due to "distance learning," friends and family wanting to stay connected, and businesses getting remote workers up in a hurry when the pandemic hit.

Zoom has successfully become the brand name that many people associate with video calls. Much like Google is synonymous with web search -- Zoom now means online meeting.

But popularity alone doesn't make it the best choice for businesses. Companies should think long and hard if the ease-of-use outweighs the security risks.

There are few platforms that can rival how easy Zoom is to use. They've done a great job making a simple tool that just about everyone can figure out how to use.

After downloading Zoom, employees can chat and collaborate with others almost immediately, complete with online meetings, screen sharing and file sharing capabilities.

The free version restricts meeting times to 40 minutes, while Zoom's other tiers allow meetings of up to 24 hours.

It has all the basics covered, as well as the cool stuff like virtual backgrounds and Snapchat filters.

Zoom integrates with many other apps, making it easy to start and schedule meetings from Outlook, Google, Salesforce, etc.

It also integrates with popular file storage apps, like Dropbox and Google Drive, as well as popular marketing automation platforms like Eloqua and Marketo.

Zoom currently has four tiers available at varying price points, ranging from free to $199.99 per month.

The biggest drawback to using Zoom is likely found in their (lack of) security.

Almost paralleling the rate of Zoom's growth in usage in recent months, was a growing number of public stories relating to hackers finding their way into Zoom meetings and causing disruption.

This type of intrusion became so ubiquitous in the Zoom world it was actually assigned a name -- zoom bombing. Even the FBI issued a nationwide warning about this particular type of hack in March 2020.

Zoom has made security a priority in recent months and has added several security features, but its challenge is that it wasn't built with security or data privacy at its foundation.

Some corporations, educational institutions, and governments have banned its use, and many information security professionals refuse to use it.

Microsoft Teams has been around for a few years and is gaining in popularity. You've probably seen commercials for it. It doesn't have as much household recognition, but it's a formidable player in the video conferencing and virtual collaboration space.

If your business uses Office 365, its a natural choice since it's already included in your subscription.

The biggest downside to Teams is that it's so robust, staff may need training to take full advantage of all of the features available. 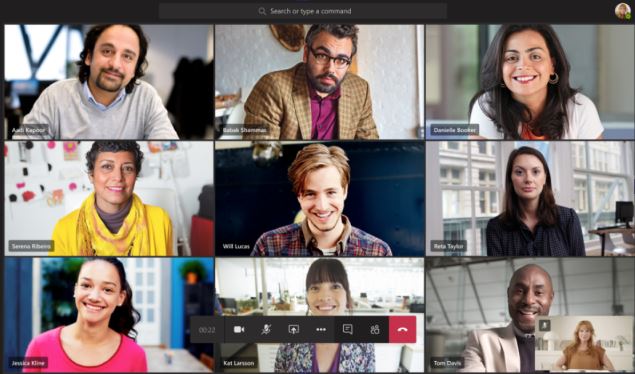 But it does so much more -- it truly is a collaboration platform as well. It can change the way your business operates, in a good way.

Not only can you hold video meetings, Teams allows you to work with coworkers, vendors, and colleagues in a shared workspace on an ongoing basis. You can chat one-on-one or with a group, share files, and work together on projects.

The free version is limited to 500,000 participants per organization, while the paid tiers offer unlimited participants.

Teams is slower to release some of the cool features that its competitors have. When another platform announces a cool new feature -- like virtual backgrounds, for example -- Teams is typically a few weeks behind.

They do appear to be leading the pack by reimagining remote work overall, as seen in their recent announcements around making online meetings more natural and human with things like Together Mode, Dynamic View, and Live Reactions.

Microsoft Teams seamlessly integrates with all of Microsoft's other office products (of course), including Outlook, Word, Excel, PowerPoint, and SharePoint.

There are also hundreds of integrations and apps available, such as RingCentral, monday.com, Dropbox, and Salesforce.

Integrations exist with other meeting platforms too, like Zoom and GoToMeeting, so you can start, schedule, and join those meetings without leaving Teams.

Microsoft Teams is included with Office 365, so you may already have access to it without an additional cost. It does require some set up and configuration by IT administrators though.

Microsoft Teams has a free version, as well as three other tiers -- Business Basic, Business Standard, and Office 365 E3. Beyond the free version, prices range from $5/user/month to $20/user/month.

You can use Microsoft Teams for free without an Office 365 subscription, although it does not include any support features or administration tools.

Teams was built with security, data privacy, and IT management in mind.

Because of its integration into the Office 365 ecosystem, businesses have control over what their users can do on the platform -- ex: where recordings will be stored, if files can be shared, which apps can be integrated, etc.

GoToMeeting has been a trusted standard in the business world for many years. It's a LogMeIn product and is a reliable platform. However, it's solely a meeting tool.

GoToMeeting is another web conferencing solution that offers the same telecommunication capabilities as others, such as online meetings, screen sharing and file sharing, with add-on options such as unlimited cloud recording, drawing tools, and keyboard and mouse sharing.

The biggest difference with this tool compared to Zoom or Teams is that it's strictly an online meeting platform. You can't create chat rooms or collaborate outside of meetings.

This software is best used as a meeting tool rather than a real-time collaboration tool.

It's also known to be clunky and a drain on system resources. Some users report reported a slowdown in their other programs when using GoToMeeting at the same time.

This software offers numerous integrations to meeting participants. Things like integrating Zapier, Google Calendar, and even Chrome into the software to maximize productivity.

It also integrates with several CRMs and marketing automation platforms, so you can schedule meetings without having to go to another system.

GoToMeeting has four options ranging from free to an average of $36 per user on a customized monthly plan.

Their pricing has historically been higher than others, though that has come down in recent months. It's unclear if that is a temporary change due to COVID-19 or if it will stay into the future.

All three tiers of GoToMeeting provide solid performance in the area of security. They have focused on security and privacy from the start.

Organizers within each tier have full control over meeting attendance with additional options including muting/dismissing users, hiding participants from each other, as well as disabling the chat feature.

What About Webex, Bluejeans, UberConference, etc?

Yes, there are plenty of other platforms to choose from!

Every business has its own needs and there are other reputable video conferencing tools available. We've only compared the three most common choices that small and mid-market businesses are typically deciding between today.

Which Video Conferencing Tool Is Right for Your Business?

That's something only you can answer.

We recommend starting with a list of what you need and want in a video conferencing platform, then working backward to see which one is the best fit.

Free trials or demos are offered from each of these software providers, so you can "try before you buy."

If you're a client and you need help figuring out which video conferencing platform is right for your business, reach out to your Technology Advisor.

If you don't use Accent's IT support services, we're still happy to help. We help guide Southern California businesses with all things IT-related so they can hit their goals without technology getting in the way. Feel free to reach out any time at 800-481-4369.